You are currently browsing jennifer’s articles.

Garnet – A Rainbow of Sparkle

Glancing at the surface gemstones seem extraordinary yet simple, but some stones are anything but simple. Take garnets for example, they’re the epitome of complex and are separated into species based on mineral and chemical composition. I won’t bore you with sciency stuff when there’s so much more amusing and fun info about garnets.

Garnet is the official birthstone of January, and the western zodiac stone of those born under the sign Aquarius. For wedding anniversaries it’s given as a gift for the second year.

The Rainbow Mineral
Red is often thought of as the only colour that garnets come in, it isn’t, it’s not even the most prized colour. Quality Tsavorite (brilliant green), Spessarite (firey orange), and Umbalite (pinks and peaches) are among the most highly sought after varieties. The tremendous colour variation of garnets makes them one of my favourites. Garnets come in a variety of colours: red, orange, yellow, green, blue (rare), purple, pink, white (near colourless), peach, brown, and black. True blue garnets are exceeding rare, however you can find colour change garnets that change from red to blue. Colour change garnets are in class all by themselves and can command prices of $6000 a carat or more depending on its size, cut, and quality. A 40% to 70% colour change is standard, and the more vibrant the colours the higher the price. 100% colour change is rare in a natural stone, so if you come across one that completely changes its colour it’s probably a synthetic lab grown gem, or it’s an extremely expensive natural garnet.

Gemologists never just simply look at a garnet with the naked eye to determine its species. Since it’s a complex stone that is a combination of species, some garnets need to be analyzed to verify the species and variety. There are approximately 20 species of garnet, these are the most common. 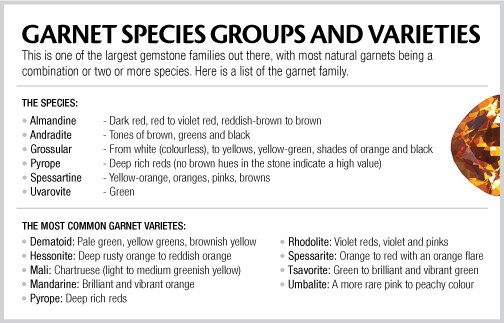 The Conqueror’s Stone
The name Garnet is derived from the latin words granatus meaning grain, and granatum meaning pomegranate, since the gem is found in its natural state resembling grains or seeds from a pomegranate. The Garnet is an intense stone that represents the creation of the world out of chaos, its the primordial fire that gives rise to spirit and creativity. They’re grounding and balancing, as well as lucky, curative, and protective.

The mystical Garnet has been highly valued around the world from Africa to Czechoslovakia, Sumeria, Rome, Greece, and South America (the Aztecs and Mayans), and from as far back as ancient Egypt (5000+ years). In ancient Lower Egypt the garnet was a gem that honoured the most powerful goddess Sekmet the goddess of war. She had the head of a lion and the body of a beautiful woman. Garnets have acted as a warriors stone, when worn it ignited the internal fire of the warrior and enhanced his awareness, and it would protect him from being wounded in battle. If a warrior was wounded then garnets would be placed in the wound in the hope that it would clot the blood. Garnets were also believed to give people (warriors and everyday people) a strengthened survival instinct and bring courage and hope in difficult and dangerous situations.

Garnets were also used for exactly the opposite purpose by some Asiatic tribes, they would use them as ammunition in slingshots, as arrowheads, and later as bullets, with the hope that red garnets would inflict more serious wounds to their enemy. They were believed to penetrate victims quickly and when in the body they were indistinguishable from blood. In more recent history (1892) the rebel Hanzas fighters used garnets as missiles against the British troops on the Kashmir frontier. Many of these garnets were preserved and are kept as historical objects.

The Grain That Rocks!
Garnet has quite a lot of meanings and historically they’ve had many uses. As an aid to your professional life they would boost and stimulate success, and help you change your old behavior in favour of new more beneficial habits and increase your confidence. This gemstone symbolizes purity, truth, love, friendship, spiritual awareness, and compassion. If you are on a quest to learn something about yourself, or you’re looking for answers no matter how uncomfortable or painful the answers may be, garnet will lead you to whatever you’re seeking. Wearing garnets as jewellery is said to boost a persons popularity, self-esteem, and creative ability in art and music.

There are a vast amount of therapies that garnets have been used for. Because many of the stones are deep red it’s closely associated with blood and regeneration. Historically it was used to protect from blood poisoning. Its abilities ranged from purifying the heart, lungs, and blood to improving circulation. Garnet was used to assist with metabolism and the absorption of vitamins and minerals (VIT A, D, and E, plus calcium, magnesium, and iodine). Some of the treatments include spinal and cellular disorders, minimizing and alleviating acne, relieving arthritic pain, low libido, cardiac issues, and heal to the thyroid and spleen. The list goes on and on, including cleansing and treating emotional, psychological, and spiritual issues and disturbances.

September 19, 2013 in Inspiration by jennifer | Permalink 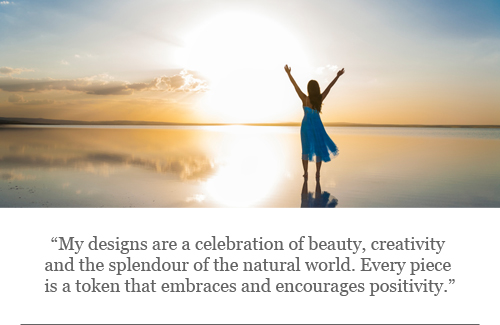 I create tokens of positive living. What does that mean? Years ago I started making jewellery. I took classes taught by local artisans and jeweller’s, and for a while I had little confidence in what I was doing. Over time it evolved into something much more than a hobby, I needed it, but not just as a creative outlet. Every time I wore a finished piece it reminded me “you can do this, you can do whatever you put your mind to“. Even now when I wear my work it reminds me “yes you can!” It encourages me to continue, it reminds me not to be apprehensive about trying new things. These pieces ended up being tokens of thinking positive for me, I didn’t even realize it at the time.

This revelation, that I’ve been creating tokens of positive living, has become my guide, my purpose. Through this process I’ve grown more confident and more courageous. Now I’m compelled to share my work and my passions. To put a smile on your face with talismans that will lift your spirits (like they lifted mine). My hope is that they’ll be whatever you need them to be: stylish accessories, points of inspiration, or affirmations. We treasure jewellery for its beauty, for the beauty it imparts on us, and for its sentimental significance. Jewellery is meant to remind us of something good, whatever that may be.

Use these pieces to delight day-to-day, celebrate a special day, or revel in an achievement (past or present). The work that I create is an expression of my desire to let you know that you are worthy of love and belonging, you are worthy of happiness and success.

These tokens are intended to remind you of the positive things in your life, whether it’s cherished relationships, a great experience you want to remember, or just because you like it and it makes you feel beautiful. You deserve to feel and look your best. You deserve to shine, be courageous and show your creativity, flourish and live your life wholeheartedly.

Discover more about expressions of positive living, my creative influences and inspirations, and creative process.