You are currently browsing the archive for the Collection Stories category. 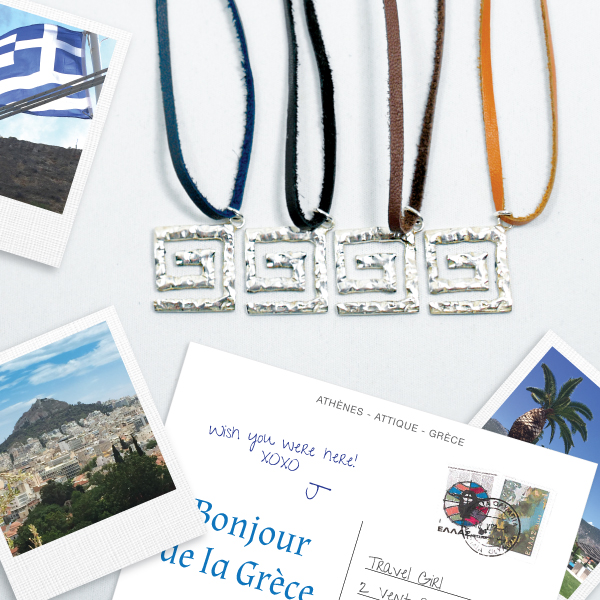 4 Meanders all lined up in a row
I started making these guys before I even knew I was going to Greece this year! Jewellery is like a choose your own adventure story – it’s your choice – your life is your adventure. The texture on these sterling silver pieces is reminiscent of the glimmering light from ripples and waves. The Meander motif is inspired by its river namesake and symbolizes friendship, devotion, the bonds of love, creative energy and the meandering of life.

Each Meander Greek key is made of solid sterling silver and hangs from a necklace of leather that’s smooth leather on the top with a soft suede underside. Order yours here.

The Meander – A Symbol that Transcends Time

“From the beginning the meander was not only an ornament;
it was a symbol, a metaphor for water.”
Marija Gimbutas, Archeologist (1921-1994) 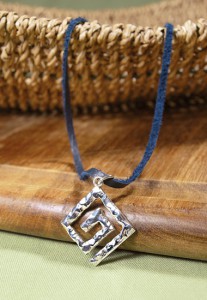 This ancient geometric shape transcends time. With it’s water surface texture it’s a token that symbolizes the energy and movement of life. It also represents the bonds of love, friendship, and devotion. The Meander makes a great gift for a friend, family member, or as a set for a newly married couple.

The Meandering Menderes
Like with many things we’re influenced by the everyday, and the beautiful elements of the natural world. The Meander motif or Greek Key was inspired by the twisting and turning Meander River, which is now called the Büyük Menderes River and resides in Turkey.

More ancient than ancient Greece
Most people affiliate the Greek Key with Greece (hence the name of course). But it’s actually much older than that. The oldest found examples of meander patterns are from Mezin (Ukraine) and date about 23,000 B.C. These patterns are fairly simple and have been found through the Paleolithic and Neolithic periods. Prehistoric examples seem to have developed independently in Greece, Hungary, Moldova, Romania, Ukraine, and Yugoslavia. We really are all connected. It’s really incredible how the human mind works. Perhaps it’s the way our consciousness evolves, we’re all on the same or similar journey as a species together.

Symbolism
This ancient geometric shape transcends time. It represents infinity, water, and the energy and constant flow and movement of life. The key in an unbroken line shows the symbolism of infinity by allowing itself to be repeated over and over again without breaking. A single Meander geometric has four corners, sometimes it stands for the four cardinal points (north, south, east, and west), or the four seasons (spring, summer, autumn, and winter). It also signifies the bonds of love, friendship, devotion. The traditional Greek key or spiral Meander shape represents waves and water.

Inspiration Board for the Meander Collection (Click on the image) 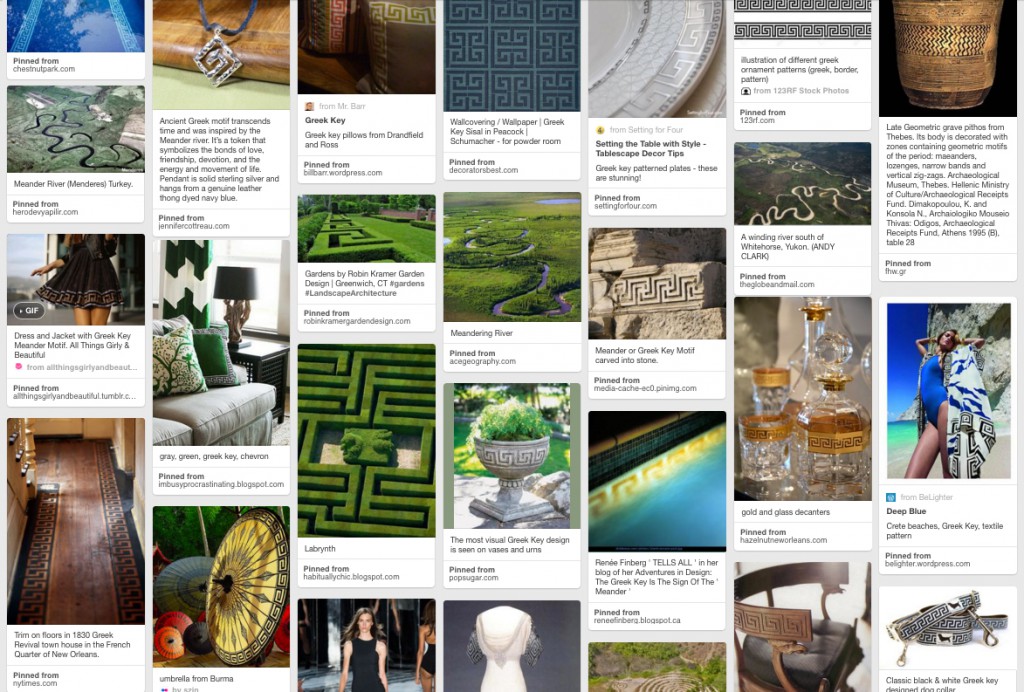