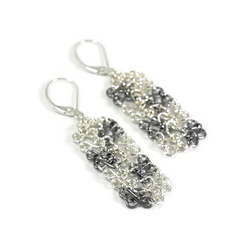 1. Black and White Gingham Ribbon Earrings. Made with bright sterling silver handcrafted links and deep charcoal oxidized sterling silver. The links are arranged in a pattern reminiscent of gingham fabric.

This years jewellery trends are in full swing for spring! One of the biggest new trends this year is the renewed popularity of gold. Since the price of gold has been lower it’s become more accessible. Welcome back gold! We missed you.

2. Feminine silhouettes
Spring is a time when you see more feminine shapes, fabrics, and colours than any other time of the year. Florals, ruffles, fringe, celestial shapes, and curves gives jewellery the softness to co-ordinates well with ladylike styles. 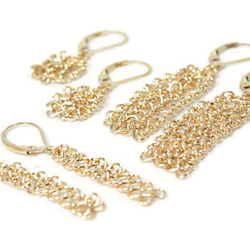 3. Delicate yet strong. These light and airy unique chainmaille earrings are warm and feminine. They have dainty details without being fussy. The small rondelle set is perfect for everyday wear. But if you want to turn heads the luxe ribbon earrings are for you.

3. Delicate in Gold
Spring and Summer is seeing trends in warm delicate pieces over cooler large bold statement pieces. The richness of gold adds warmth and sweetness to pieces. Since they’re visually and physically lighter the daintiness of delicate pieces makes them excellent for hot summer days and traveling light.

4. Layering and stacking
It’s been on trend for a few years now and there’s no sign of it letting up. Layering and stacking is just simply an enjoyable way to be creative with your favourite pieces. It’s an art form really – to layer it well and decide what sizes and shapes work best for you or the outfit you’re wearing. 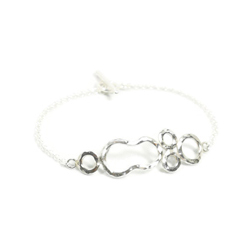 5. This asymmetrical Verve sterling silver bracelet is lively and it’s moderate size allows you to layer with dainty chains.

5. Asymmetry
From cluster designs to mismatched earrings – asymmetry is fun and hip. Let yourself go and be creative! Asymmetry allows you to do your own thing and show your individuality. Keep it simple and somewhat minimalist when your accessorizing to keep it chic and sophisticated.

Fun and Creativity
One of the greatest things about jewellery is that it gives you the freedom to be experimental and artistic. You don’t need to be that courageous to express your authentic self.

Learn about getting your own Bespoke Jewellery

Aquamarine is from the Latin “aqua marina” meaning seawater. This stone is named after the beautiful hues found in the worlds oceans and seas. From vibrant blue, turquoise, sea green, pale and briny yellows, to colourless.

Soothing and calm the birthstone for March is said to have come from the treasure chests of mermaids. Around 480 – 300 BC it’s recorded that sailors kept amulets carved in aquamarine depicting the sea god Poseidon (Neptune) on a chariot. It was a talisman of courage and prosperity, but was used mostly for protection to keep sailors safe against sea monsters and raging storms. Aquamarine was revered as a symbol of happiness and eternal youth by the ancient Egyptians, Sumerians, and Hebrews. It’s likely that aquamarine was known about and possibly used in prehistoric times as well. 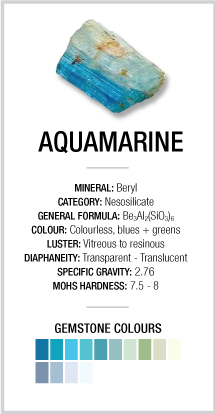 Fish Stories
In Roman mythology this gem was a sacred stone of Neptune that was said to have washed up onto the shores from the depths of the sea, almost as if it were a gift from the gods.

Some ancient peoples were convinced that the stone held images and secrets of the cosmos. Aquamarines were thought to be used in divining as a crystal ball or magic mirror. Oracles and prophets were said to use them to make predictions and tell fortunes. Rumour has it that it was used as an eyeglass by Emperor Nero about 2,000 years ago.

A Sophisticated Beryl
This is a gemstone that evokes feelings of trust, friendship, courage, harmony, faith, happiness, and youth. Aquamarine comes from the mineral Beryl, the same mineral as its sister the Emerald. The difference being the chemical composition, the blues of Aquamarine come from iron, while an Emeralds green comes from chromium. Another key difference between the two is clarity and presence of inclusions. Although Emeralds hold a higher value, Aquamarine stones are cleaner with few to no flaws or inclusions. The value of an Aquamarine is based more on the quality of the colour and clarity, than on size or carat weight.

Deep blue stones are the most sought after and have the highest price tag. The best quality stones with the richest colours are found in Brazil. Now that gemstone lovers are wanting unique stones, with more of a variety in terms of colour, moss aquamarine and other colours are becoming popular. Aquamarine’s refined nature makes it a chic and timeless stone to accessorize with.

Did you know ‘Maxixe’ a type of Aquamarine can fade in sunlight? It’s colour fades due to exposure to UV light and heat. The colour can be restored by being irradiated.

Check out the before and after images of ‘Maxixe’

Fathoming the Mysteries
Aquamarine is said to have purifying and healing qualities, like flowing rivers and tides that cleanse, refresh, and renew. Ancient peoples would grind up the stone into a fine powder, they would dust thier eyes with it to cure disease, blindness, an other issues. Throughout history people have placed aquamarine stones in water and allowed them soak. They would then use the water to to cleanse their eyes of tiredness or ailments. The brilliant blue stones are said to alleviate depression, sea sickness, and inflammation. It was thought to be a cure for insomnia, sore throats, and digestive problems. Many believed that aquamarine would bring new friends into your life, increase your concentration and levels of energy, bring you wealth, calm your nerves, and rekindle love in marriage.